Making public transport more attractive is an important step to reduce carbon emissions caused by travel. The smartphone game Bus Runner, which is based on beacon technology and open data, is an attempt to make riding the bus more attractive by turning it into a game.

Bus Runner can be played while riding on one of the bus lines in Malmö. The game is context-aware, which in this case means that the content and duration of the game depends on where and how far along the route you are. 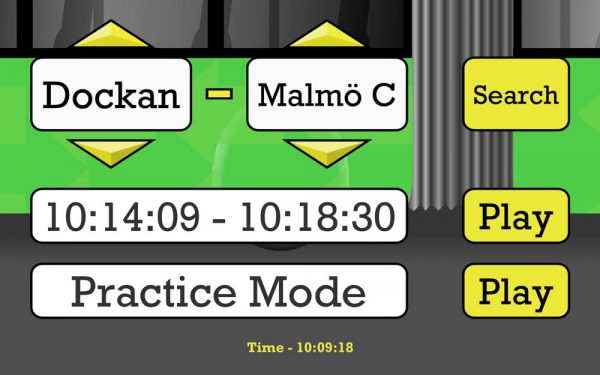 Before playing, the user selects a start and a destination and can see when the next bus departs.

As part of the Data Innovation Arena project, bus stops in Malmö along Line 5 (the so-called superbuses) and the central station were equipped with beacons that send information to travellers. In Bus Runner, this beacon data is used to determine the player’s location which the game then combines with other context data such as recognized landmarks and styles of buildings, which are then used to dynamically create the game-world and obstacles in it. A landmark that can appear in the game (top) and its real-world counterpart (bottom). The yellow dots show the bus stops between the player’s start point and destination.

Using real-world data helped players avoid missing their stop. As one player put it, “You don’t need to pay attention to two things anymore. You can just look down at the game and you sort of know where you are without even thinking about it.”

Contextual data from beacons and other open data sources can thus be used to create services that make using public transport more attractive. Games are one such service but this data could also be used for generating content for other types of infotainment services.

This work was partially financed through Vinnova’s Challenge Driven Innovation program. The Data Innovation Arena project is a collaboration with Skånetrafiken and 20 other actors related to the public transportation sector.