Open event on the Internet, things and people

On November 15, the Internet of Things and People (IOTAP) research center at Malmö University hosted an open event. The center’s application areas were presented and the visitors could then try prototypes and discuss with the researchers. The event attracted more than one hundred visitors including current and future collaboration partners, students, and researchers.

“An increasing number of physical products are today connected to the Internet. This development, known as the Internet of Things, can be regarded as the fourth wave of digitalization. First came the computers, then the Internet, which was followed by mobile phones with Internet access, and now the Internet of Things. But, to create usable and useful services, we mean that it is important that the user perspective is given greater attention,” said Paul Davidsson, professor and director of the research center.

IOTAP has five application areas: Smart Living, Smart Health, Smart Cities, Smart Transports and Smart Learning. The open event started with researchers giving a brief introduction to each area and the projects they are working with.

Dementia care and energy efficiency
Many research and development examples were presented, for example, technology use in dementia care, mobile services for energy efficiency in existing buildings, technologies that measure the quality of air and lighting, sensors to coordinate transport or payment systems, solutions for how to reduce food waste, and understanding how we learn best and why.

After the presentations, there was opportunity to visit the five application area stations. Here, the researchers told more in-depth about various issues, and showed movies, demos, and prototypes. 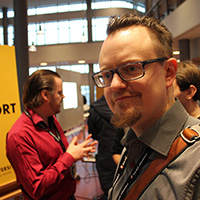 “The Internet of Things gets even more interesting when you also add us humans. Two things are required to make this take off: the technology itself, and the interface and user experience of it all,” he said and continued:

“We at All Binary know technology and user experience. By being at this event, we hope to link with research, get inspired and make new contacts.”

Make new contacts
At the event were also Sue Harden and Bitte Zetterman who work with organizational development and e-learning at Skåne University Hospital, SUS. They have both collaborated with university researcher Jeanette Eriksson, in the area of Smart Health.

“The short presentations about the applications areas and the projects were great. It was particularly interesting to learn more about the TagOn project. We also hope to be able to establish contacts and see what’s going on,” they both said.