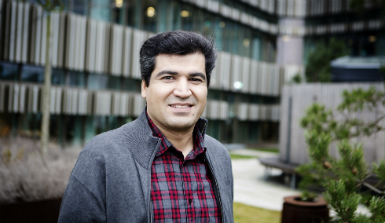 While some people are still amazed that we can carry a computer in our pocket, Shahram Jalaliniya is looking for the next step in wearable technology. As a postdoc researcher at the Internet of Things and People research center, he wants to find new ways for us to work with computers, and for computers to work with us.

“With desktop computers, we devote all our attention to using the computer while wearable systems have a potential to support the user with useful information while he or she performs other tasks. The idea, which was slightly futuristic, was to explore the possibility of having a wearable assistant with us to help with everyday activities.”

As part of his PhD, Shahram also explored gaze interaction with wearable computers.

“Eyes are ideal for interacting with wearable devices because they leave your hands free to perform other tasks. Aside from the possibility of using eye movements for providing explicit input to the system, knowing where the user is looking at in the environment helps the system recognise the user’s intentions.”

Exploring new fields
By reading eye movements, systems can figure out what kind of information the user is looking for; this is what Shahram and his colleagues refer to as eye tracking for implicit interaction. In this way, the eye movements can be used as an implicit input for interaction with a smart device or smart environments.

“It’s a novel field of research, so it’s open for innovation. The part I’m interested in is a form of unconscious, implicit interaction between humans and computers based on eye data.”

“Malmö University is very open to new research fields, and by looking at the courses that are taught here you see that it’s also open for new ideas. Since the field I’m working in is new and growing, it’s easier to be in this kind of environment.”

With new technology creating possibilities in the field, it’s not impossible that the interest for eye tracking might soon catch up with that of virtual reality.

“There is a lot of interest for virtual and augmented reality applications right now, but there are challenges with how to interact with these devices. It makes a lot of sense to use eyes for that. Gaze data can also be used for rendering and optimizing computing resources in virtual and augmented reality head-mounted displays. As those applications become more popular, gaze interaction and eye tracking will be a part of that development. In the long term, this technology can be available to anyone.”

Text: Amanda Malmquist, originally published under Medarbetarporträtt at the Faculty of Technology and Society.